My chef friend Garth spent about 10 days in Mexico recently at a swanky all inclusive and came back talking about the food. This morning at breakfast he mrntionned the shrimp tacos and it’s all I could think of all day long. I realized mid-morning that I had everything I needed at home to make some non-authentic tacos and my plan was set.

I dressed some shredded cabbage with a limey yogurt mayo mix with a little jalapeno and cumin powder. I marinated some shrimp in pepper, salt and jalapeno. I grilled some corn tortillas in a cast iron grill pan and followed that by cooking the shrimp. For assembly all I added the last of the jar of spice salsa that my friend Jon gave me.

They were sloppy and spicy and good. Likely not nearly as good as what Garth had in Mexico but not bad,  all things considered.

In other news, the record high water levels have started to recede. Thankfully. Many thanks to the folks at MNR and Hydro that managed the flow so well this time. It was pretty cool to see that much water go through the lake but my thoughts are with those who live on lower land.

April snow melts when it hits the ground, LoL

They forecasted another snowmageddon but I really don’t take weather reports to seriously. And, after all, April snow melts as soon as it hits the ground. Last week I was counting the number of garlic plants poking through the straw. To further strengthen my case, I drove home from my knitting group at the Eganville library on Thursday night and it was snow-raining and melting on contact.  Once again, I was right! (As an aside, I’ve joined a knitting group at the library called ‘The Chronicles of Yarnia’ 🙂 ) 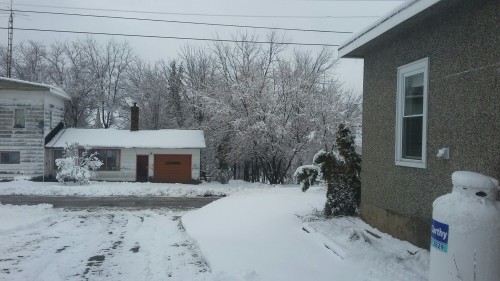 The first time I got up to pee at 2 the power was out. It was still out when I got up at 430. When I woke up for real it was 530… still no power. Then I got a text from one of my staff who starts at 6 to tell me that the storm had arrived. About 6 inches of heavy wet snow and strong winds. Lots of trees down everywhere. No estimate for a return of electricity amd everything was closing down. With power being out I got my first snow day in the 4 years I’ve been here.  There have been LOTS of snow days for other people but I live a 5 minute walk from work so I always end up going in.

I think I was the only person in a good mood. Great even. I heat with wood and cook on gas. And a few LED flashlights round out my kit. I spent much of the day hanging out at Garth’s as he figured out a way to get his oven to run off his generator so he could be open for pizza day. It was fun. I even got to cook toppings at my place because the generator wouldn’t handle the oven and the stove at the same time.

Power was on for most in town by 1030 pm Friday . I powered back on at 10 am Saturday. Many many people outside of town didn’t get power back until Sunday and there are some that won’t get it until mid week.  Yikes.

It was a good test-run for me. I learned that I can handle a 48 hour power outage without a worry.  My freezer stayed frozen solid and everything else worked great. I do need to pick up a cone-style drip coffee thing and an extra LED light but other than that, I’m good.  I had once thought about getting a generator but considering my experience this time AND the fact that in a pinch I could run an extension cord to my fridge from my neighbours generator, I think I’m good. 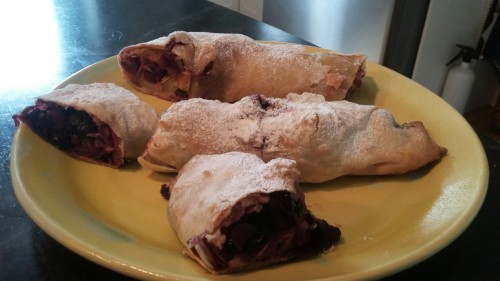 The rest of the weekend was great. I made 2 kinds of strudel dough – still recipe testing, and 2 kinds of cherry strudel – sour and sweet. I made a chocolate cake for my friends 65th birthday tomorrow, a big pot of soup for my board meeting, and I boiled down a bunch of sap.  Lots and lots of Sunday kitchen time. What could be better?!

A big week ahead with a 4 day weekend as the prize. And hopefully no more snow days.