There’s a first time for everything

I got to witness chickens being slaughtered and prepped the other day. It was pretty amazing but I didn’t take any pics out of respect for the chickens.

I stopped in at my friends farm for a visit and there was a big white panel van parkked beside the chicken coop. It turned out to be a mobile, licensed and inspected chicken wagon. Three workers, dressed in aprons and boots efficiently worked a pop-up style assembly line. It was fascinating to watch. 47 chickens lived a good life, ate great food, had a desirable address and a quick and respectful end. I could eat that meat in good conscience – except  sadly they were all spoken for.

Instead of chicken, I made another batch of jam. This time with yummy concord grapes that my friend gave me on my birthday. Fun fun.

A weekend in the city is on the agenda. It will be great to visit with friends and stock up on provisions but seriously, I have no idea how I ‘lived’ there so long. It’s busy, loud and smelly.

I’ve made 2 different type of pickles so far this year – a fermented dill and a seven day sweet ad sour. Both were made with Joanne’s cucumbers – I bought a basket a week every week she had them.

The dills were pretty straight forward. Water salt dill garlic cucs and a little chilli.Store in a cool place and wait 10 days or so.  the glory  of lactofermentation  They were passable. I’ve made better. I used pickling spice in some of the jars and I think it made them a little bitter. Definitely a good learning process. 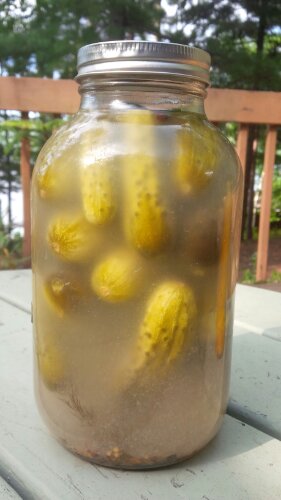 I used fermentation air locks on a few of the bottles. They worked as intended but I will likely use them when I do other lactoferments, not pickles. Sauerkraut season is upon us 🙂 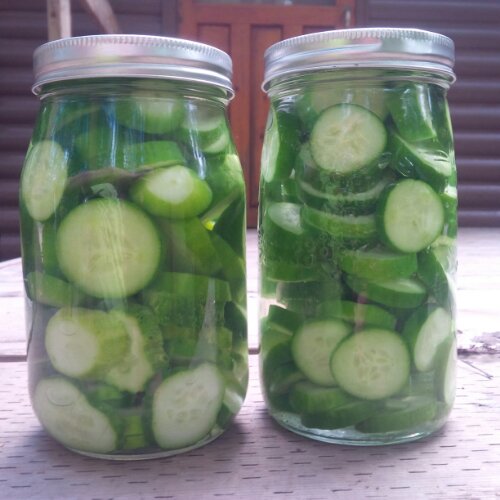 They seven day pickles were a little more involved but still straight forward. Soak the sliced pickles in salt water on day one. On day 2 soak them in alum water. Day 3 soak them in flavored vinegar. Day 4 and 5 do the hokey pokey (that’s what it’s all about). Day 6 add sugar. Day 7 bottle. They are pretty good. Definitely a keeper.

In all I have about 10 litres of pickles.

Two people preserved in honour of my birthday! 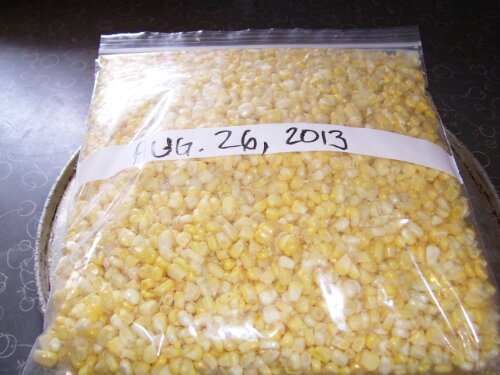 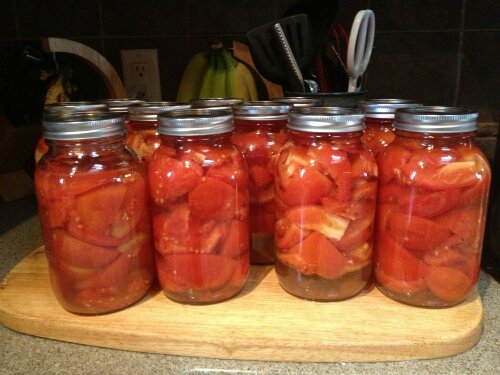 What joy this brings me!

Other birthday treats included 2 feeds on butter tarts, 2 serenades, and some one on one time with my new friend. She’s a cow. She’s too bashful to have her picture taken but she sure is pretty!

Peaches are STILL in season

Hot sauce. It occured to me last year during hot sauce season that peaches and mangoes could stand in for one another. Peach season was over by that point so I needed to wait until this year to test the theory. 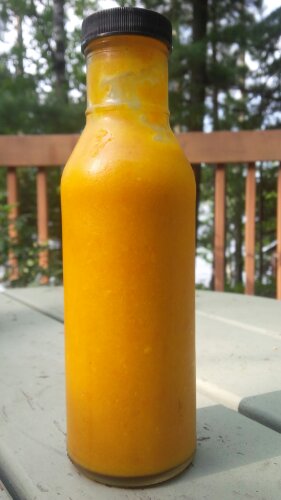 It worked. I’ll be picking up lots of habaneros next weekend at the Kitchener Market. More to come on that front for sure.

And a peach galette. A rustic tart :p

And today’s preserve was more peach jam. This time with ginger.

Market treats and a little bit of home grown

Every week at the market it seems something new is in season or a season has passed. This week was the first time I saw winter squash.

Joanne was selling them. Big fat multi-coloured squash with a protrusion of sorts growing out of the blossom end.

I can hardly wait.

The other find was tomatoes. I’ve had some cherry tomatoes over the past few weeks but none of the big tomatoes looked quite good enough. That’s changed. I bought a small basket from Joanne and a big basket from Marie.

I couldn’t resist. Breakfast today was a toasted tomato sandwich with lots of mayo. It was awesome. 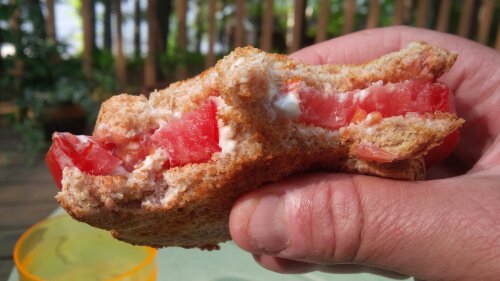 It calls for home made bread but that’s likely not in the picture anytime soon. Something to look forward to.

The star of the week though almost deserves its own post.

Golden locks. Attached to about 45 bulbs of garlic. My home grown garlic. 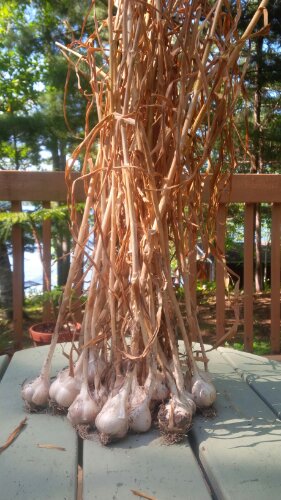 I planted it in Kitchener last October and have been parenting it from afar. I had my Kitchener neighbour send me regular pictures of the progress and had her dig it up a week ago. Special delivery from a visitor brought it up here.

I had a special request for blueberry jam so I bought one quart of them from Jerry P at the market on Friday. My basic recipe for fruit jams is a 2:2:2 ratio. 2 pounds of berries. 2 cups of sugar. 2 t of lemon juice. In this case it was mostly lime juice.

It turned into 2 good sized jars and 2 wee jars in no time. I don’t bother with ‘processing’ the jars in a canner – I just keep them in the fridge. 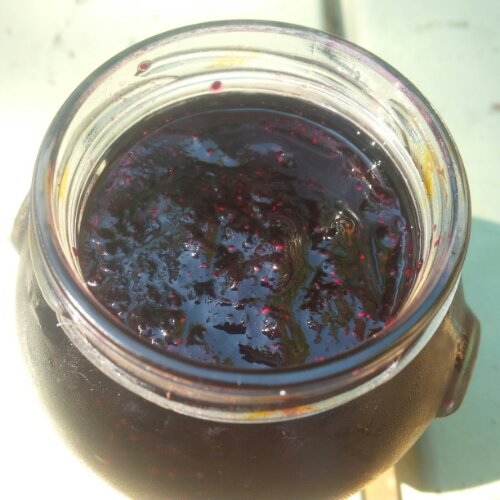 It’s good. Really good. I don’t think it will last too long.

David had some multi-coloured small tomatoes at the market that looked almost like candy and reminded me of a recipe I’d read earlier in the week on the Smitten Kitchen blog. She called it ‘Burst tomato galette’. Make a butter pastry with a little yogurt and lemon juice in it. Cook the tomatoes whole in a little olive oil until they burst. Add diced zucchini and a little corn. Saute briefly, add green onion, and let cool.

A galette is basically a little rough formed pie, open on the top. Some descriptions refer to a galette as a rustic tart 🙂

Baked in a hot over for 40 minutes with a little bit of finely grated cheese on top. The result was incredible.

The pastry was the best I remember baking. Ever. I think it’s because I used a technique that I’d read about but never tried. Freeze the butter for 20 minutes then grate it into the flour on a box grater. The result was crisp and flakey. I hardly had to mix it with fingers at all before adding the liquid. Definitely the method I’ll use from now on.

I really had no experience with choke cherries before but people have been saying it’s a banner year. 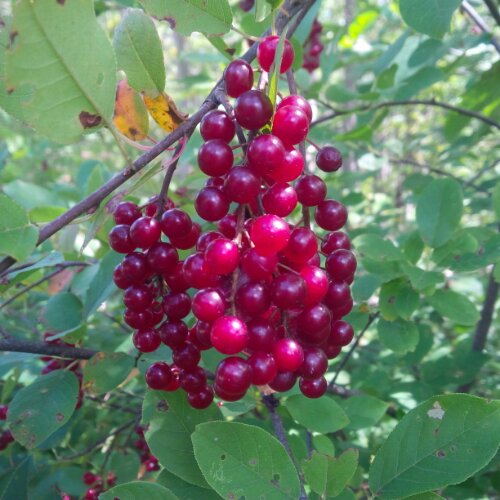 I went out to Crooked Slide Park and they’re almost dripping from the trees along the side of the road. The berries are about the size of a blueberry, range in colour from almost black (ripe) to deep red. They are astringent and have a huge seed but the make a great jelly. 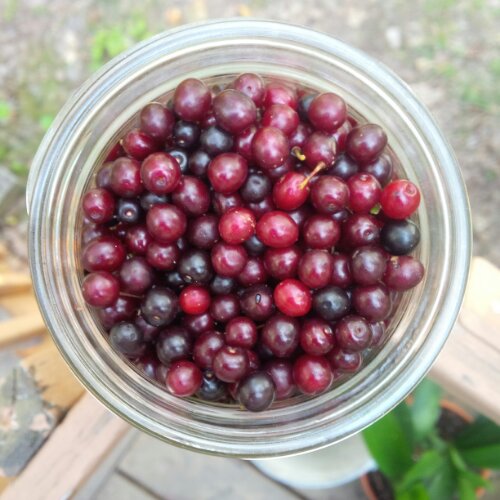 It hardly took any time at all to pick about 5 litres of them. 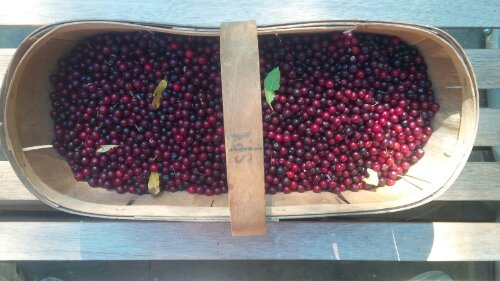 It was a fairly simple process. Boil with a little water. Strain off the juice. Reboil the juice with pectin and sugar and bottle. It’s the first time I’ve used pectin in one of my jams this year.

The result was 4 jars of brilliantly coloured jelly. It will be a nice addition to dark winter days.

Have I said how much I love this time of year! 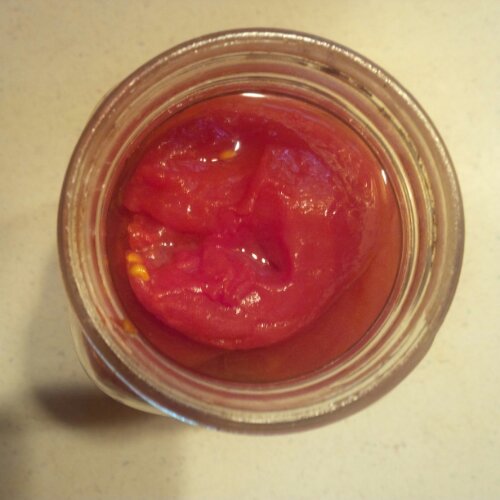 That is the very last jar of tomatoes that I canned in 2012. Running out on August 15th tells me that I made the right amount. This year I’ll be dehydrating a bunch as well. I plan to pick them up at St Jacob’s Market on Labour Day weekend along with a bushel of red peppers for roasting and freezing and some habaneros for all manner of condiments. 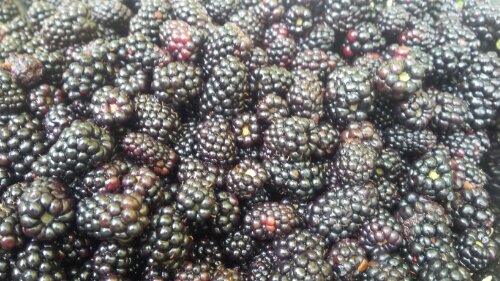 And nectarines became chutney. An Indian flavored chutney with garlic ginger onions turmeric cumin and mustard seed. Vinegar and brown sugar to make it sweet and sour and an hour at a slow simmer to make it jammy. 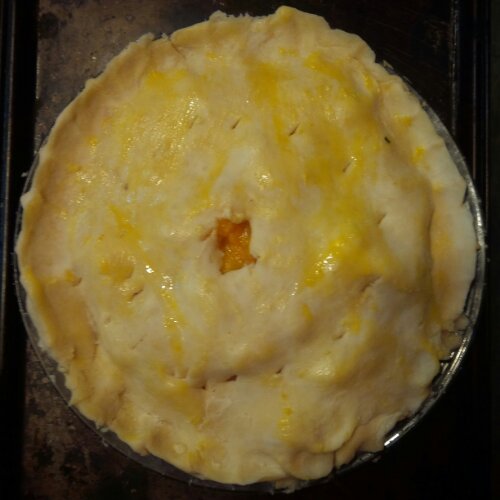 And once again, another basket of cucs became pickles. I also managed to get 5 litres of corn off the cob and into the freezer. A mix of Temptation and Paydirt he said. If I’m lucky I’ll do another 10 litres before the season is done. I liked having it in the freezer last winter.

Sunday morning breakfast of champions. On the deck.

And we’re just at the beginning…

Many thanks to Petr for putting this together.

A rare evening on my own. Others are occupied with a night on the town and I get the place to myself. :). I didn’t stray far from the regular pattern other than eating my dinner on the front porch.

As I looked at my plate I could hear JM – my Chefs School instructor telling me I failed on colour composition. Two yellows and a white just won’t do. If he were here I’d tell him to taste it before he judged. The girls clearly loved it 🙂

Jon’s potatoes. David’s beans. Joanne’s eggs. And butter from some unknown factory. I should probably address that sometime and start buying or making better butter. Likely another post.

(The peach jam was amazing.)

You Are What You Eat
Blog at WordPress.com.